What it boils down to is if you live in the snow, you probably hate it. Hate is a strong word but who’s mincing words? Snow is aesthetically pleasing, it’s silent and it’s beneficial to the land, but snow will also stab you in the back and sprint away, chortling with glee.

Mind you, I’m not talking about the one or two inches that falls occasionally in town, transforming it into a fairyland. It hangs around long enough for folks to snap a few hundred photos each, most of which end up being posted on social media. I’m no different. As someone noted, “For someone who hates the snow as much as you do, you post a lot of pics…” 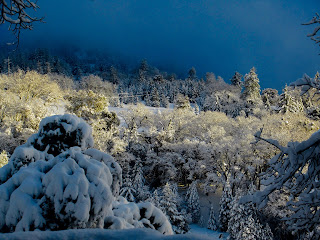 I do take many photos because snow is pretty, especially while it is still falling. There are so many variations on a theme that I could shut my eyes, indiscriminately aim the camera, and just keep snapping the shutter randomly, as I slowly rotate 360 degrees.

That being said, I would also gladly give up this pastime, if I could barter for safer walking conditions. When you get eighteen inches dumped on you over a 48-hour period, and the temperature drops after the front moves on, you’re going to have plenty of time to develop a relationship with your new-found friend.

Sunday through Wednesday we had bright sunny skies for the most part, but the temperature rarely raised its head out of the thirties during the day, and dropped back down to the twenties at night. The sun would do its part to start the melting process, but all that accomplishes is to turn the light, fluffy snow into a foot-thick blanket of ice.

It’s deadly to walk anywhere that the snow has been disturbed, either by vehicles, people or critters. Walking on unbroken snow is doable safely, because my feet break through the surface crust and go a few inches into the snow, but then my feet want to stay buried in the snow and tug at my legs as I make forward progress.

The net result is that I travel at a worm’s pace and it’s hard work. So, do I walk on packed down snow that is insanely slippery-but easy to make progress on, or walk on unbroken snow that is safe but extremely tiring? Whereas it’s always nice to have a choice, the choice here is one of necessity. I take the safer alternative because I do not want to have to ask myself, “What were you thinkin’, Lincoln?”

When I refilled the depleted wood boxes the day after the snow departed, I simply shoveled a path to make the thirty-foot wheelbarrow run manageable. That took time as does anything to do with snow, but it was still better than bringing in firewood by the armload.

It seems as though I burnt as much wood this past month, than I did for the entire rest of this winter, so I hope that pace is going to mellow out. On the other hand, water is the most precious commodity to the farmer, and you will never hear me sniveling about vast amounts hammering us.

Making sure that water is available to critters outside is key when the temperature drops into the twenties. Sure there is running water in the creek just below our house, but with the snow as deep as it has been, that presents its own set of problems.

Having gotten into the habit of keeping a large saucepan of water on one stove and the tea kettle on the other one, I always have boiling water to help out with outside water containers for critters whose water is frozen. It’s hard to conceive of, but in plain language, without access to water, critters in the wild are in a world of hurt.

It’s been two weeks since my car has moved. There actually was one day in the middle there, when we got two nights and one day of pounding rain, around six inches altogether, and I could have escaped. Fortunately, in a rare instance of clear thinking, I opted not to venture out in 40-mile-an-hour winds, while two inches of rain pounded the highway.

Finally, because she has to be close to healthcare services in Willits, Gluten-Free Mama fled the mountain before the snow began, two weeks ago. She came back yesterday evening though, with the upcoming storm forecast to be rain only, and all is well with the cosmos.

It should not require a genius-level intellect to read between the lines, to discover the real reason I hate snow.

"Tell Laura I Love Her"

If you are of an age, then you were unable to say those words-you had to sing them. The year was 1960 and the transistor radio was the hottest commodity to hit the streets since the television made its appearance. With smart-phones being operated by four-year-olds these days, it’s hard to conceive what the attraction of a little, tinny-sounding box was, one that was most often held directly against the ear.

For those of us born in the fifties, the transistor radio represented freedom, both from the soothing sounds of KPOL, easy-listening &%#$, and the confines of the kitchen. Whatever KPOL played, it was Mama’s station and not ours.

My earliest memory of transistor radios is my brother Brian’s two-transistor job, the envy of all of us in the household. “All of us” included six boys and one girl, my sister Jean, with number eight kid arriving that same year in March. Only one more to go for our baseball team, we all thought. Jean goes by JT now and has for as long as I can remember, but every once in a while I think of her as Jean, and it makes me feel warm and fuzzy.

It was accepted that it would be enterprising Brian who first brought portable music-and baseball-into our lives. I cherish the memories of the four older of us boys lying out under the stars, listening to Vin Scully broadcast the Dodger games. Never in the history of the universe, did we ever imagine such a scenario, and what was involved, other than a transistor radio?

“Cut on and belted into deep right field! Back goes Clemente, back to the wall! He leaps-it’s gone! Frank Howard has just done it again!”

As sweet as tuning into baseball was, there were endless hours during the day to fill, so we turned to AM pop music. We listened to KHJ (top 40 hits-Boss Radio, the Real Don Steele), KRLA (Casey Kasem) and KFWB (Wink Martingale). Later I would switch over to FM, and KMET became the only stop on the dial besides KFI, the Dodgers’ flagship station.

Still in the infancy of my worship of music, I was smitten with Ray Peterson's song, “Tell Laura I love Her,” a syrupy ballad of teen-aged Tommy, who entered a stock car race in order to win prize money for a wedding ring. The ring was to be for Laura. During the race Tommy’s car overturns and bursts into flames, and with his dying breath, he implores Laura not to cry, for his love for her will never die.

Though it was probably played five or six times a day on KRLA, it didn’t matter-every time it came on it rocked my world. Mind you, I had no interest in driving stock cars, fast cars or any cars at age eight. The song just grabbed my soul and held it in a death-grip.

Whether they did it as a joke or as a genuine offering, my three older brothers awoke me one night, not long after I had gone to sleep, to enjoy yet another rendition of Tell Laura. In reflecting back on the incident, I can’t tell you what reaction they expected from me. What I do remember was that I was stoked. My favorite song!

In case you think that’s all there is to the story, folks, nothing more than a goofy journey back to an era where being awakened from a dead sleep to listen to a smarmy song, produced what might be an unexpected reaction, you would be wrong.

I mentioned the number eight kid in our family arrived in march of 1960. That wold be Laura, my second of two sisters. Coincidence that her name is Laura? Could be yes, could be no-could be just maybe so.

In any case, Laura, song or no song, I love you.